Changes in cyanobacterial density due to application of Artificial Floating Island model with macrophytes: an experimental case study in a tropical reservoir

The Valle de Bravo (VB) reservoir is part of an important hydraulic system that provides about 40% of potable water to 21.5 million inhabitants of the Metropolitan Zone of Mexico City (Mexico). This reservoir shows deterioration in water quality due to its current eutrophic condition, which favors the recurring of cyanobacterial blooms. To date, there are no restoration strategies for this reservoir, so the use of eco-technologies such as Artificial Floating Islands (AFI) is proposed for the removal of nutrients and the improvement of water quality. Therefore, in this work AFIs have been implemented using two macrophytes (Phragmites australis (AFI-P) and Schoenoplectus sp. (AFI-S)) to evaluate the presence and distribution of potentially toxic cyanobacteria in relation to physicochemical variations at the AFI sites. The study was carried out over a period of 24 months (October 2016 -September 2018) divided into two cycles (C-I and C-II) with a dry and rainy season each. Cyanobacteria were the dominant group in the phytoplankton during all the study period. Nine potentially toxic cyanobacterial species were detected, with the predominance of Microcystis aeruginosa, Aphanizomenon yezoense, Pseudanabaena mucicola, Anabaena planctonica and Planktothrix agardhii. In this work, AFIs increased nitrates and had no effect on phosphates. Cyanobacteria were not reduced at AFI sites, however in rainy season in the second annual cycle (C-II) the concentrations of extracellular microcystins in the AFI-P and AFI-S were decreased while intracellular toxins were more strongly reduced only in the AFI-S.

Each AFI had a specific effect on four out of five potentially toxic cyanobacteria. Thus, AFI-P promoted the increase of M. aeruginosa but reduced A. planctonica, while AFI-S promoted both A. yezoense and P. mucicola. The AFIs modified the dynamics among cyanobacteria particularly diazotrophic A. yezoense which was favored by nitrates and the other three species maintained their presence by the phosphates. M. aeruginosa, non-diazotrophic, responded to nitrates only in the absence of A. yezoense. Finally, in VB reservoir we found a mutually exclusive relationship between M. aeruginosa and A. yezoense likewise between A. planctonica and P. mucicola. 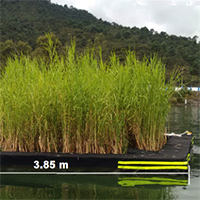 This work is licensed under a Creative Commons Attribution-NonCommercial 4.0 International License.

FOR AUTHORS
FOR REVIEWERS
INDEXING
LINKS

Tweets by Journal of Limnology

is an Open Access, academic peer-reviewed journal published by PAGEPress®, Pavia, Italy on behalf of the CNR-IRSA, Italy.
All credits and honors to PKP for their OJS.
Registered in print in Verbania, 7-10-1959, n. 58.